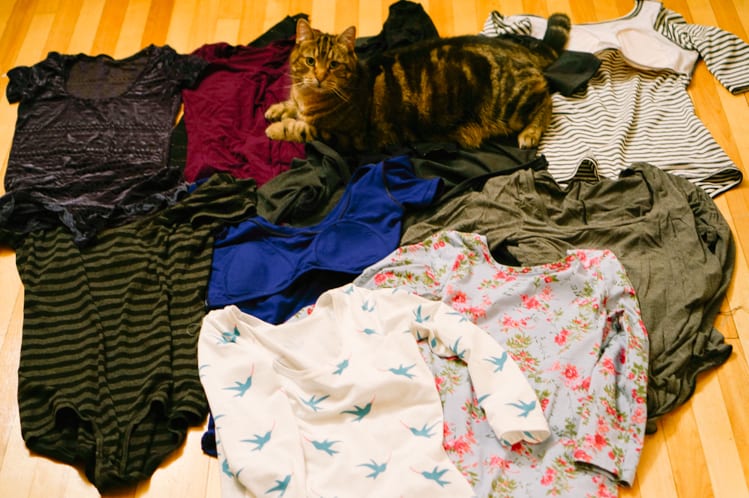 There has been a debate raging (well, as raging as a bunch of kindhearted crafty folks can rage) about the nature of pattern testing in the independent pattern community, and it’s something I’ve been thinking A LOT about in the last few weeks.

The sewing blog world is growing rapidly, and as a result, a lot of sewing bloggers are releasing patterns. It’s a natural evolution; you start a blog, you develop your skills, you learn pattern making, you have an idea, you think maybe it’s something other people would like to sew. For a lot of us (and for me in particular), the natural next step is to reach out to people you know in the community to try it out. When I was working on the Bombshell, I was just getting my feet wet. It was scary, and overwhelming, and at times I had no idea what I was doing. So I asked my friends, my sewing friends, to make it. I asked for brutal honesty. And I got it. As a result of their feedback, and the subsequent feedback I got from non-testers, I fixed and tweaked the pattern into something I am divinely proud of.

Without those first few brave testers, The Bombshell simply wouldn’t exist. When it came time to release Nettie, I relied on the same system. I reached out to those same friends, a few new ones, and a few ladies whose style and skills I admired. Again, I asked for and received brutal honesty. The pattern is better because of it.

I never paid anyone, or supplied fabric. I would love to be in a position to do both of those things, but the reality is that I am a tiny one woman show. For the last 6 months I’ve been working on average 80 hours a week. I go to my day job and then come home and work until midnight or 1am almost every day. I haven’t had a real day off in months. This Sunday I took some “time off”, went on a bike ride with my boyfriend and came home and sewed for another 6 hours. It will be a while before I can consider making this a full-time gig, and it will be at a great pay cut, working substantially more hours than I am at my office job.

All this to say, I don’t foresee a day, at least for my tiny company, when I can afford to pay people to test patterns. I am relying on the goodwill, enthusiasm and skills of people I’ve met on the internet, and all I can offer in exchange for their time and hard work is a free PDF pattern, a digital hug and a round of cocktails if we ever meet in person. It seems some people feel this is an unfair exchange, and I sympathise with that point of view. The unfortunate reality however, is that the bounty of exciting, unique new work we’re seeing simply wouldn’t exist without this process. The Big 4 have the resources and staff to test in house (and we all know that is not a perfect system!) but most of us indies designers are working out of our homes, driving our friends and families crazy, working around the clock, for a relatively small income… it’s a slog. A fun, exciting, rewarding slog, but a slog nonetheless. A slog that would not be possible without the generosity, time and wisdom of people who want to participate in the process.

None of us are rolling around in piles of money while Sade plays. I know my gals at By Hand London are doing well, but they’re working out of Elisalex’s apartment and busting ass trying to stay afloat. We all are. We love and appreciate our testers, more than I can probably articulate without getting emotional, and we want this process to be fun! We want to learn from you, to be BETTER. It wouldn’t be possible without the hard work and cheerleading we get from the people who not only want us to succeed, but want the whole industry to get better.

I, personally, love testing patterns. I’ve tested everything BHL has released, and have posted my honest accounts of my experiences. Thankfully, those patterns work for me. I have nothing negative to say because I have nothing negative to say. I’m testing something for another blogger as well right now, and in all cases, I am brutally honest. I recommend different finishes, I point out confusing explanations, I note drafting errors. And since I’ve been lucky to love everything I’ve tested, I’ve shared that love with you. Because I want By Hand London to succeed. I want Sewaholic, Colette, Deer & Doe, Papercut, Salme, Victory, Named, Bluegingerdoll, Seamster, Fehr Trade, Tilly, Grainline, Thread Theory, DIY Dixie, every single indie designer out there, to succeed. I want people to pursue their dreams and be creative and brave and articulate their unique point of view in a way that other people can enjoy. IT’S IMPORTANT. And it makes our craft, our skills, our community stronger.

So that said, a lot of the negative comments I’ve been seeing on this topic just plain bum me out. I think it’s a great conversation to have, and I hope it will encourage other designers to be more transparent about the process, but I really want people to understand how we on the other end are conducting ourselves. I obviously can’t speak for everyone, but I think it’s safe to say we are not greasing the wheels. No one is getting paid to lie about patterns, unless I am hopelessly naive and there is some seedy black market internet scammery going on that I am unaware of. People are asked to test, and if they want to, they say yes. No arms are being twisted, no cow heads are being thrown in beds. If the process goes well, people give feedback which is then implemented in the final product. Because we have a vested interest in supporting one another (and this is a feature specific to our community in general) people share their makes in a positive way for the most part. They are free to also share the problems they had, the fitting issues they encountered, what they liked or didn’t like about the pattern. That is how the process should work. If that’s not happening, designers and bloggers alike need to communicate their needs and issues more clearly in the future.

If people are being paid, they need to say so. Identifying what has been sponsored, and what has been freely done, needs to be very clear so there is no confusion about where things stand.

What is very, very important to note is that very infrequently will anything fit out of the box. We all have our sweet, amazing, idiosyncratic bodies. Our adorable dowager’s humps, our bodacious booties, our big naturals, our perky a-cups, our cozy tummies, our skinny or plump shoulders, our petite or elongated torsos. Many times I see people complaining of drafting issues from patterns that have worked flawlessly for others (Big 4 included). It’s very hard to say sometimes what is a design error, and what is something that needs to be tweaked to accommodate a specific figure. Some patterns are tricky to fit, regardless of the execution of the drafting. Some pattern companies design for specific body types that are not quite your own. I am thinking of Nettie right now. Some folks are having issues with it being narrow in the shoulders. Since I am my own fit model and have somewhat narrow shoulders, it follows that that would be the case. Is it a drafting mistake? Or is it just something to keep in mind when you make your own?

And then there are pattern fails. We’ve all seen them. We’ve read enough negative reviews or seen enough ill-fitting dresses that we know “That one will need some work” or “That one is not for me”. In those cases, I hope we can be honest, while being kind. Constructive criticism is healthy and necessary and makes for better designers. I am so sympathetic to this because I know how much insane work, sleepless nights and gray hair goes into this process. I know how much it stings when someone is not happy with something they’ve made that I designed. (And this is NOT to say that this is often the case! It’s very rare and infrequent when I see an unfair or mean-spirited review. But sometimes it’s nice to remember there is someone out in the world who worked their butt off on something that just didn’t work out).

All this to say, we are doing our best. We want to make you happy. We want to design things that get you excited to make clothing. That is the most important thing of all. We are learning, we are evolving, we will get better. And you are the most crucial part of that process. Every single person who blogs their makes, regardless of whether they are an official tester or not, is integral to the success of this burgeoning industry. Without sewists generously giving of their time, most of the new independent companies simply would not exist.

And honestly? If I couldn’t depend on bloggers I like and admire to test for me, I wouldn’t be here writing this post. No Bombshells. No Netties. Nada. That promotion is what makes it possible for me to dream. That promotion is what makes it possible for any of us to get up in the morning, sit at our drafting table and think about what you might like to wear. It’s just the hard truth of trying to start a small business in a huge, wired marketplace.

For my part, I will be doing tester calls for all future patterns. I want the widest range of people I can get my grubby mitts on. I want to know what you think. I want to know what works and what doesn’t. But only if you want to. Only if you want to be part of the process. A process that has you at the very center. A process that wouldn’t exist without you.

So. It’s way to late and maybe I’ve over shared or been too honest, but this has been weighing on me for a few weeks. I needed to talk to you. And I want to hear what you have to say. What do you think of the pattern testing issue? Do you think it’s fair? Do you think it’s wrong? Do you want to test for me? I’m listening.